When you think about each state’s nickname, slogan, or even their most iconic food, most of them are no surprise. Georgia as “The Peach State,” deep dish pizza from Illinois, and California’s famed “Eureka!” slogan. But what about each state’s wine?

The varietal of wine each state gravitates toward can say a lot about it: wine can reflect a state’s climate, agriculture, food culture, and its quintessential personality.

Or if you’re looking to send the gift of wine (what could be a better present?) to someone in another state, you can impress them by sending the wine that will most likely represent the place they live.

If anything, knowing the type of wine that’s popular in a state can be a conversation starter. So, let’s talk about the most popular wine types by state. *

Quick Facts on the Most Popular Wine in America

Most Popular Wines by State

Most Popular Wine by Region

One thing is clear, wine is universally enjoyed across the United States: it can be paired with a nice dinner, enjoyed with appetizers, or appreciated on its own! Let’s look at the different regions throughout the country to see if there’s any similarities between these states’ most popular wines, and the foods and flavors we know and love from them. 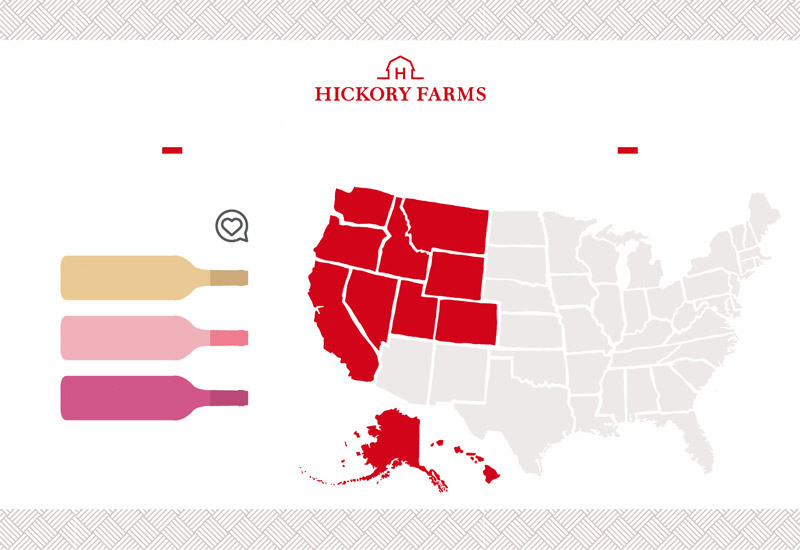 Most Popular Wines Of
The West (And Pacific)
Cuvée
Riesling
Lambrusco

The West (and Pacific)

With their varying mountain, beach, forest, and desert scenes, states on the West Coast tend to favor wines that pair well with the seafood, rich flavors, and a good time. From orange wine and cuvée to warming reds like malbec, Lambrusco, cabernet sauvignon, merlot, and zinfandel, states across the West Coast favor wines as diverse as their climates.

The two states that aren’t attached to mainland USA favor cuvée as their wine of choice. While this varietal comes from a vat or tank and can be found in a variety of different wines, from red blends to whites, blush blends, and sparkling varieties of wine, the French term is often associated with using the best grapes available. White cuvée wines in particular fare well with seafood, which may be the reason why it’s so popular in Alaska and Hawaii, where fishing and seafood are prominent.

Riesling, a white varietal with German roots, offers fruity flairs of apricot, nectarine, peach, apple, pear, pineapple, lime, and lemon notes, along with honey and ginger aromatics. It’s the most popular wine in Oregon for good reason, as much of the riesling industry is based in the Willamette Valley, and the cool climate is essential for producing the signature grape that gives the wine varietal its unique character.

One surprise in the list of most popular wines of the West is Lambrusco (Nevada’s top choice). Lambrusco is a red wine varietal, whose name isn’t heard of as often as its red friends like malbec, cabernet sauvignon, and zinfandel. Often “frizzante,” or lightly bubbly, Lambrusco can occasionally be found as a fully sparkling wine with dry, semi-sweet, and sweet varieties. This fruit-forward varietal originated in Italy and pairs well with red meats, hard cheeses, and fruity desserts—sounds like the perfect pairing for a night out on the town. 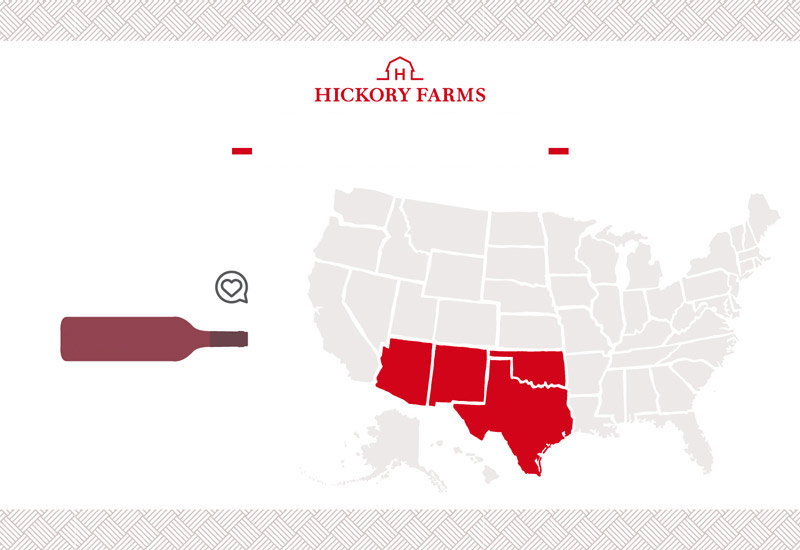 Most Popular Wines Of
The Southwest
Shiraz

You’d think that the warmer climates in the Southwest would make this region favor a light, white wine, however Arizona, New Mexico, and Texas have all gone red with cabernet sauvignon, mulled wine, and shiraz, respectively. For Texas, shiraz is a clear winner: its range of flavors and notes, from smoke and bacon to floral violet, beautifully complement barbecue and grilled meats. Arizona’s and New Mexico’s top foods are also meat and cheese heavy, making these robust, often fruity, and sometimes spiced, reds an ideal choice.

Oklahoma stands out from its Southwest neighbors with its top choice of the sweet, fruity, bubbly Prosecco.

Shiraz wine is made from a dark-skinned grape, usually featuring a bold, full-bodied red flavor with smoky notes of pepper and black fruit. It’s also referred to as “syrah,” and its name varies depending on the climate of the region it’s grown in. Syrah is often associated with cooler-climate growing regions, while shiraz tends to come from warmer growing climates—and stylistically, the shiraz varietal’s lush, fruit-forward profile embodies warmer, sunnier climates (ahem, like Texas). 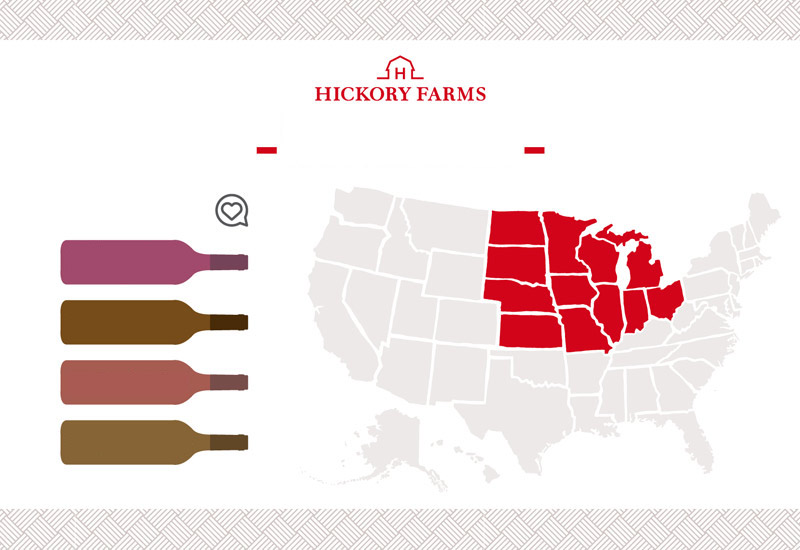 The Midwest region of the United States stretches across many states that experience the four seasons in full force, which may point to some of the warmer reds they’ve chosen as their top picks. Cabernet sauvignon is the most popular wine in the Midwest, favored by about a third of the region. The other two thirds of America’s Heartland reflect the friendliness and hospitality that we know and love: many Midwest states favor the celebratory staples of mulled wine, sangria, cuvée, and Champagne.

One of the most recognized red wines in the world, cabernet sauvignon is the wine of choice for these four Midwestern states: North Dakota, Kansas, Illinois, and Ohio. As a darker, fuller-bodied red, this varietal is extra warming during a true Midwest winter. Pair a glass of cab sauv with a juicy cut of Midwest steak.

Sangria, which is Indiana’s and Wisconsin’s most popular wine, can be enjoyed in a few different ways. Some like to toss in chopped fruits, and others like to add additional spirit to the drink by mixing red or white wine with brandy. Regardless of how it’s enjoyed, sangria is a great drink for entertaining—which makes sense, considering how both these states love a good gathering, be it celebrating a win from their favorite Big Ten football team, the Packers or the Colts, or maybe it’s the fact that both states gravitate toward brandy and apples, especially during the quintessential fall season. Whatever the case, sangria brings Wisconsinites and Indianans together for a good time.

Favored by Missouri and Nebraska, mulled wine is well known for its spiced flavors. Mulling spices like cinnamon, cloves, allspice, and nutmeg meet dried fruit like raisins, apples, or orange rinds to create a wine that can be served hot or warm, traditionally during the winter.

Iowa is a bit of an outlier with its top choice being orange wine, thanks to the growing number of millennials throughout the last decade. Made from a range of different white grapes, orange wine’s flavor profile can be difficult to pinpoint. From light red wine to sour beer, orange wines are complex, fuller-bodied, and typically higher in tannins when compared to white wines. 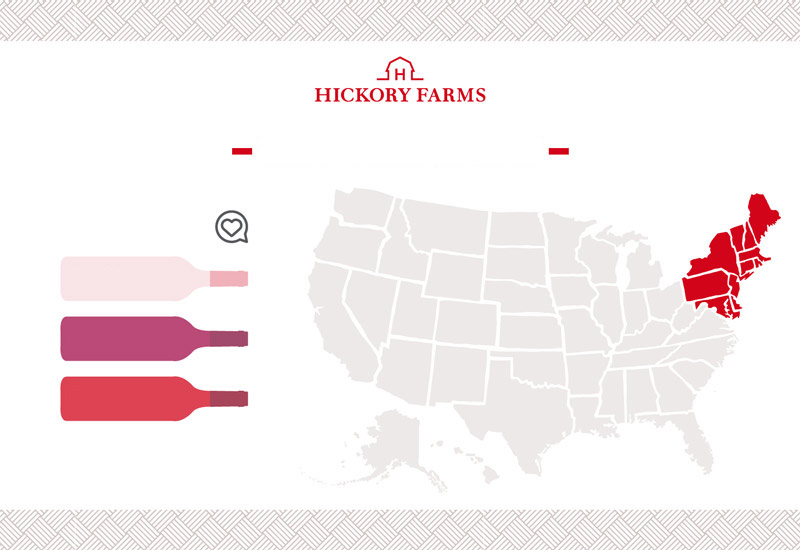 Most Popular Wines Of
The Northeast
Rose
Bordeaux
Port

Known for its history, landmarks, and stunning nature, the Northeast revels in the finer things in life—including wine. There sure are a wide spectrum of favorite flavor profiles in this region, from the sweet and sparkling to the robust and classic.

Maryland and Maine, two big fishing states, naturally lean toward the refreshing rosé varietal. With lovely notes of grapefruit, passion fruit, and mango, this popular summer wine is the ideal complement to grilled lobster and fish, seafood, and raw and lightly cooked shellfish. Perfect for a day on the boat or pierside!

A popular wine in the state of New Jersey, Bordeaux is a red wine varietal that’s made with a blend of merlot and cabernet sauvignon. It’s a medium- to full-bodied wine with a flavor profile of black currant, plum, graphite, cedar, and violet notes. Fitting for “The Garden State,” Bordeaux pairs well with the umami flavors found in more savory foods like red meat, duck, mushrooms, and cheese.

Rich and sweet, port wine comes in a few different styles. The two most popular styles of port are one with a berry and chocolate flavor profile, and another that’s nuttier and more caramel flavor-forward. Originally from Portugal, Vermont’s number one choice, port is commonly sipped as a dessert wine but can also be enjoyed with salty and dry hard cheeses (like Vermont’s infamous cheddar cheese!), as well as pecan pies, biscotti, and other nutty delights. 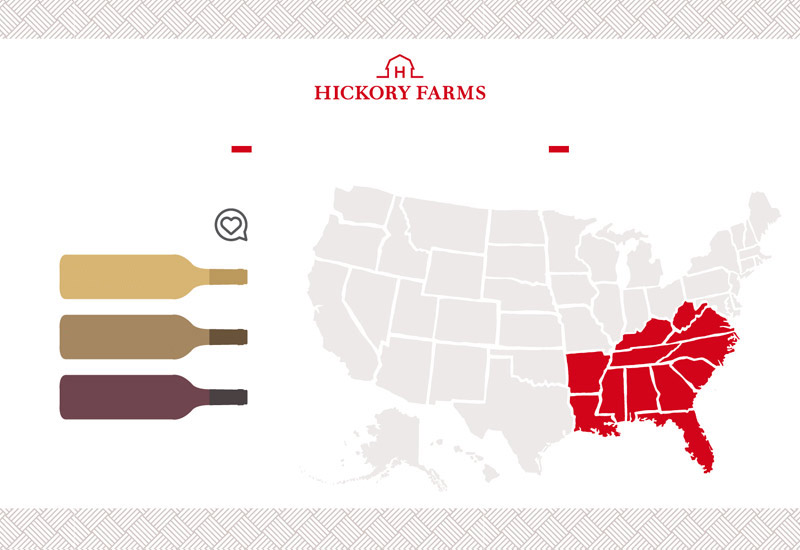 Most Popular Wines Of
The Southeast
Moscato
Chardonnay
Zinfandel

From smoky, rich barbecue to sweet, buttery cobbler, Southeasterns know how to whip up a plate of mouthwatering flavor. Like the Northeast, states in this region vary on their most popular wine choice, with only North Carolinians and Virginians agreeing on Riesling.

Moscato is known for its sweet profile, with notes of peach and orange blossoms that shine through every sip. Typically enjoyed in a fizzy white or rosé style, it pairs well with foods that balance out its sweetness: foods that are spicy, sour, salty, and bitter. Naturally, foods from Louisiana, the true Southeastern melting pot, are filled with warm, flavorful Creole and Cajun culture.

Chardonnay is a popular white varietal that can be unoaked or oaked. Unoaked chardonnay features flavors of apple and pear, while oaked chardonnay tends to be creamier and butterier in profile. Pairing well with subtly seasoned poultry and pork, buttery dishes, and foods that caramelize from roasting or grilling, chardonnay wins Kentucky’s heart for most popular wine. This wine varietal is a no-brainer for a Kentuckian who is looking for the ideal drink to pair with a Hot Brown sandwich or grilled barbecue.

Zinfandel, the most popular pick in “The Peach State,” can be found in both red and white forms. While both come from the same grape, white zinfandel offers sweeter flavors of citrus, melon, fresh red berry, and subtle spices, while red zinfandel is more complex in profile with notes of jam, blueberry, black pepper, cherry, plum, boysenberry, cranberry, and licorice. Zinfandel is best enjoyed with barbecued meats, fried green tomatoes, and bold, hearty soups like Brunswick stew (a Georgia classic!).

And the Most Popular Wine Goes to…

While no region across the country can unanimously agree on a particular varietal, each does favor wine with flavor profiles that pair well with the foods they take pride in being known for.

Whether you’re looking to strike up a conversation about wine in your state or you need some direction in what wine to send to a friend in another part of the country, the more you know about wine, the better.

Ready to give the gift of wine? Choose a nice bottle or wine basket from Hickory Farms to win the key to anyone’s heart.